Give us feedback →Edit this page on GitHub →

Polygon Supernets are a blockchain stack powered by Polygon Edge. You can also call it an ecosystem — a set of modules that work seamlessly together and add to each other's functionality.

They allow you to create a dedicated blockchain network optimized to fit your particular needs and easily deploy your Web3 applications on it without sacrificing security or performance.

Supernets praise themselves for higher performance, constant and predictable throughput for multiple use cases, and customization through the configuration of every aspect of the blockchain network. Over 20 Web3 projects are using them.

Supernets offer an open platform with a L1 blockchain network — Polygon Edge. Though, Edge is not the only building block of Supernets, it is its heart.

There are 6 main modules in the architecture of the Edge. 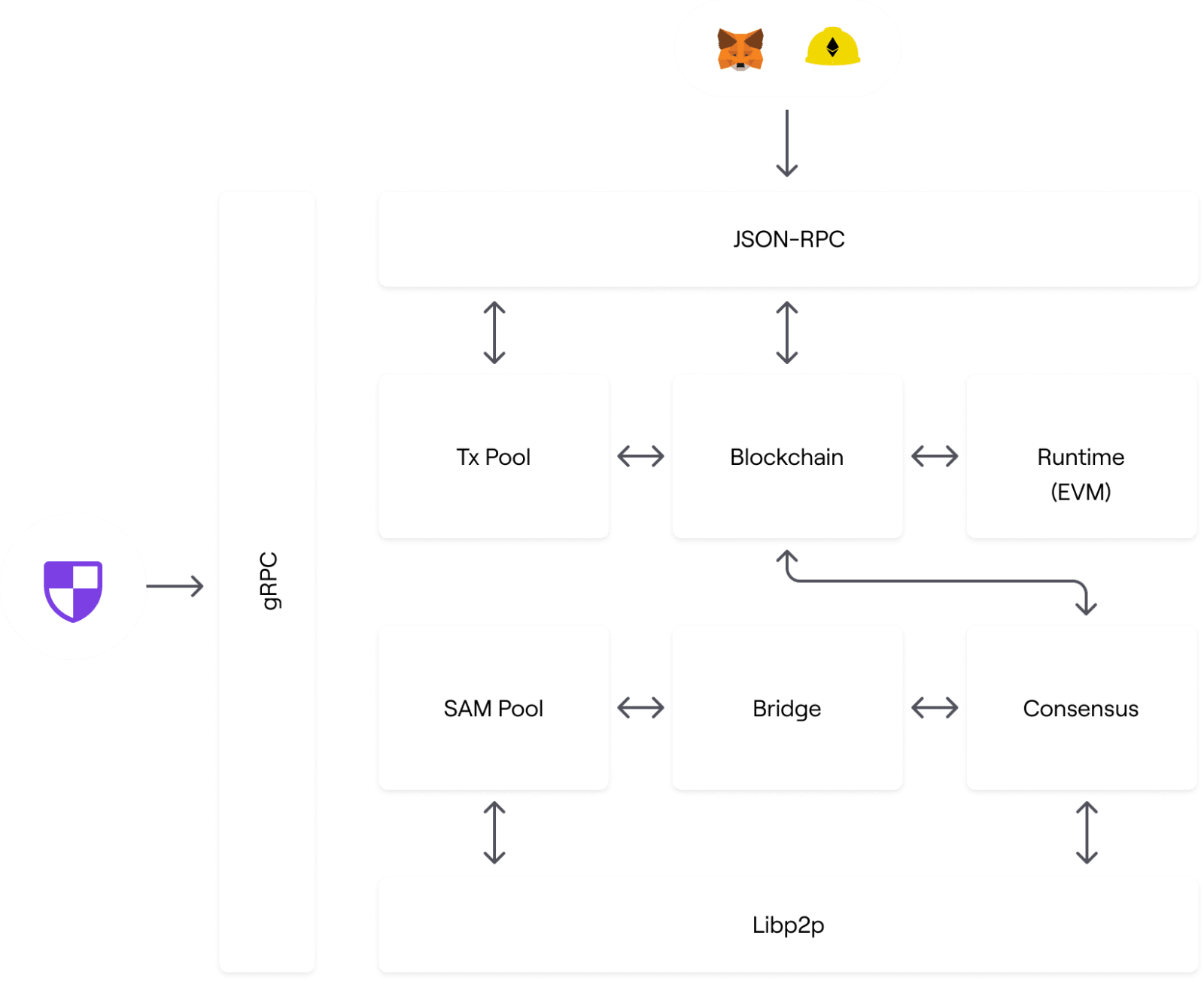 Supernets use IBFT PoA is the default consensus option. In IBFT, validators are responsible for creating the blocks that get added to the blockchain.

Validators take turns in proposing the next block (round-robin), and for the block to be validated/inserted in the blockchain, more than 2/3 of the validators must approve it.

Transactions only need to be sent to a single node, typically one operated either by you or a trusted operator, which will in turn broadcast it to the entire network.

Supernets are designed to operate in a trustless environment. Each node independently validates every transaction by executing the smart contract. All nodes are expected to have exactly the same copy of the blockchain ledger — a merkle tree of blocks and long lists of transactions in them. Malicious attemps to change the ledger can be easily detected by mismatched hashes from the different states that do not fit in the merkle tree.

Supernet have built-in EVM (Etehreum Virtual Machine) support, which is a widespread standard in the blockchain space. It means smart contract on a Supernet are EVM bytecode compiled from high level languages, such as Solidity.

Solidity contracts are easily ported to Supernets without any modifications. So, any developers with Ethereum building experience can do the same on Supernets, using tools including Truffle suite, Hardhat, MetaMask, Remix, and block explorers with ease.

With built-in EVM support, Supernets enable you to create custom tokens based on universally recognized interface such as ERC-20.

Supernets can operate in different modes customized to what your project needs:

What can Ankr offer your Supernet?

Ankr is the leading Web3 infrastructure company. It has to offer the fastest, most reliable services to power any Web3 project or bring a Web2 project to blockchain.

Ankr advertizes App Chains as its own wholesome ecosystem of modules with full set up, maintenance and support.

As App Chains are gaining adoption and popularity, we are partnering with other similar ecosystems to extend their functionality and improve your experience as a client.

With Ankr App Chains on your Supernet, you'll gain access to:

Reasons to use Ankr App Chains for your Supernet

There are more than several reasons, but we'll try to be humble:

Who Supernets and Ankr are for?

Supernets are for any company who wants a dedicated blockchain for themselves to continue to build, launch and scale their applications. An infrastructure provider to build all of their specific blockchain infrastructure along with additional features upon request.

Ankr App Chains are for any Supernets client who wants to improve security of their Supernet and enable the required functionality not yet found in their Supernet.